Today, our team is very proud to announce the go live of sun2wheel AG. The Swiss based startup provides charging infrastructure and 2nd-use batteries coupled with user-centric apps for households, condos and SMEs with larger EV fleets. sun2wheel is specialized on operating bidirectional charging infrastructure and management systems for 2nd use electric vehicle batteries.

Our systems create customer value by maximizing solar powered mileage, grid independence, and by minimizing peak demands with stationary and/or mobile batteries. In ensemble, this drives down the total cost of ownership (TCO) and optimizes the utilization of decentralized solar energy resources.

With this article I want to briefly lay out the motivation and the opportunity that the sun2wheel team pursues.

EVs have come a long way

Although EVs were already introduced more than 100 years ago, Switzerland had a more recent and very particular milestone in the history of EVs that is closely related to the mission of sun2wheel. Back in 1985, some enthusiasts and pioneers got together and created the first solar powered rally called “tour de sol” to demonstrate to the general public the potential of solar power. In its early versions, the EVs were purely powered by onboard solar panels with max. rated power of 480 Watts and a small lead-acid battery with a capacity of roughly 5 kWh. The “tour de sol” created a lot of momentum and fascinated the general public. After all these years, transporting yourself with cheap and clean solar power still remains the dream of early EV adopters. But the story does not end here!

A few years later GMs EV1 hit the American market with a 18kWh battery. In the early 2000s, we haven’t seen an increase in battery capacity in EV prototypes but rather a technology change: driven by demands of portable electronics, Lithium-ion batteries became the main contender and were used in slightly modified form in many novel EVs like the Tesla Roadster (2008). Apparently, the “tZero” (the predecessor of the Roadster) and early prototypes of the Roadster had bidirectional charging capabilities, meaning that the EV could be also discharged when connected to the grid to help balancing the grid during times of high or low demand. However, this feature of the Roadster was likely ahead of its time, as regulations did not allow vehicles to feed back any energy different from wind or solar to the grid. Back then and unlike today, solar energy was after all far more expensive than grid supplied energy.

In the 2010s, the Lithium-Ion battery-technology has been further adapted for EV usage and the learning curve has driven battery costs further down. As a result, new EVs with battery capacities above 70 kWh can transport individuals easily 500 to 600 km on a single charge. New market entrants like Nio promise to crack the 1000km range with a wowing battery capacity of 150kWh!

As an EV enthusiast or early adopter, you are probably aware that such a large range is in most situations not needed as most individuals travel on average rarely beyond a distance of 30km per day (corresponds roughly roughly to 5kWh). Nevertheless, many EV adopters may deliberately purchase a long range EV to overcome rare but rather long trips with few fast/super charging stops.

The “range” of your home 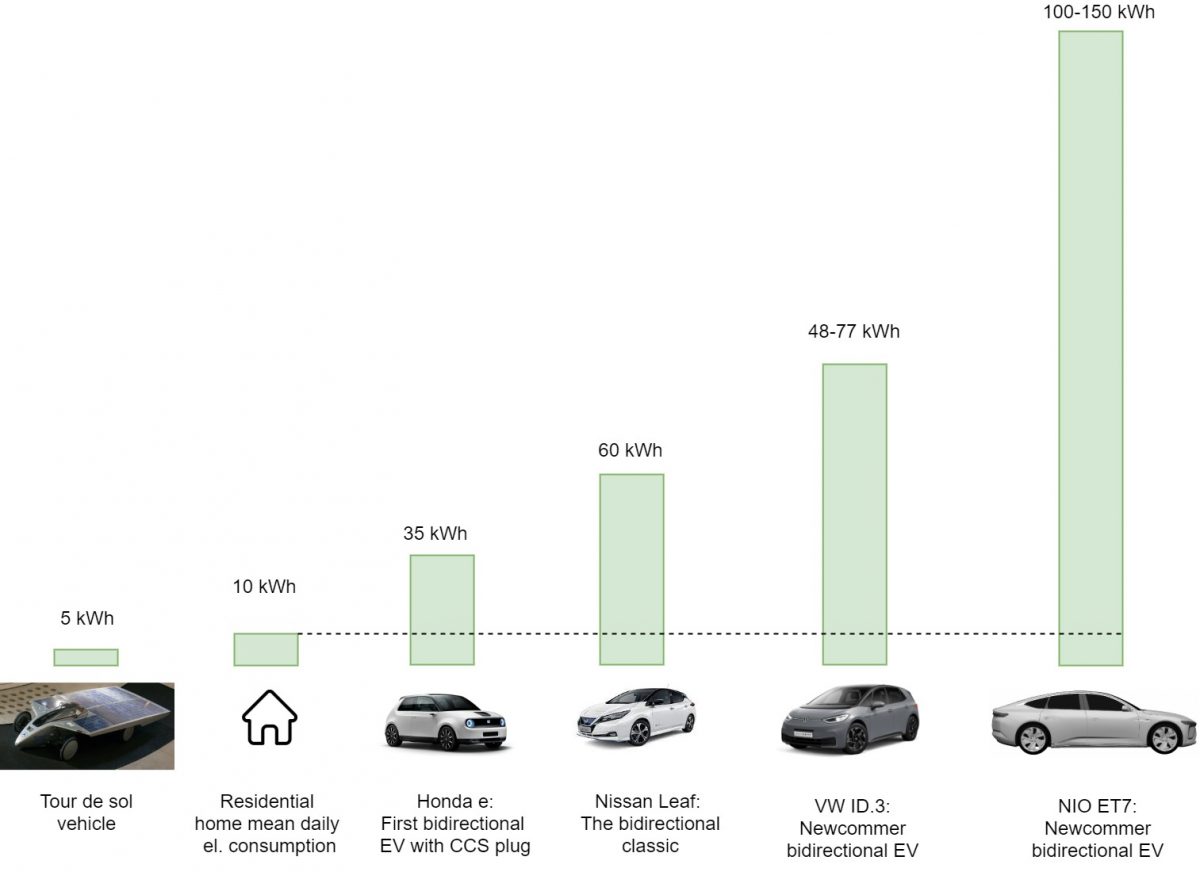 It is crucial to interpret the discussion around range and battery sizes of EVs in the context of the energy system or the prosumer household (i.e. consumers with roof-top solar). The average consumption of a single family home is around 10kWh per day (about a third of this demand will be covered directly by self-consumption through the roof-top solar system itself, reducing the mean net consumption even further). Most of the new EVs hitting the market in the coming months come with a battery capacity above 35kWh, at least 3x more than the average consumption of a household. However, typical middle class EVs will surely provide battery capacities anywhere north of 60kWh or at least 6x more than your average daily consumption!

The figure above illustrates the battery capacities of bidirectional EVs (i.e. the battery can be discharged when connected with our bidirectional charger) and how they compare to the average daily residential electricity consumption. The exciting part is that more and more EVs will have bidirectional capabilities, which offers a cost effective way to store surplus solar energy or a novel way to offer ancillary services to grid operators.

To be clear, if you are planning a long trip, you will surely not use your EVs battery to power your home appliances or help to stabilize the grid. However, those trips do not happen often, and sun2wheels mission is to make this excess battery capacity available to any building and the energy system at large when you use your EV to cover only short distance rides.

Value for the user

Many households can turn their building into a little power plant with roof-top solar systems and produce electricity for less than 0.1CHF/kWh (consuming electricity from the grid costs more than twice as much). Your bidirectional EV can therefore help you to store cheap surplus solar energy during the day and release it at night or when the sun doesn’t shine (Vehicle2Home, V2H). 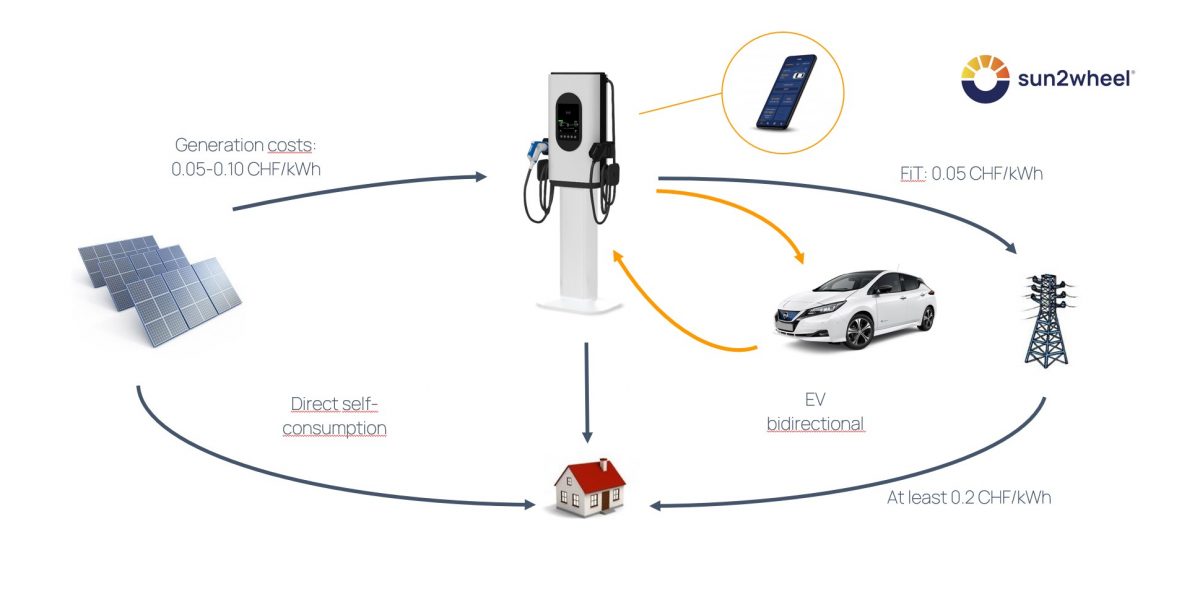 This is also economically highly efficient, as your EV is in most cases cheaper than a classical stationary battery (if you look at the per kWh cost of your EV). Our V2X-controller will make sure that there is always enough energy available to cover the desired distance. Another source of monetization is the provision of reserve power for the electricity grid. Already today, grid operators reward storage operators (small and large) when providing power reserves (positive and negative) to handle temporary imbalances in the electricity grid. Therefore, households or entire fleets can participate in these ancillary services and monetize the temporary idle batteries by reserving or holding back power for the grid (Vehicle2Grid, V2G).

Through our app, we make the experience of driving with solar energy and using the EVs battery to power a home more tangible. The app allows to set minimum battery levels for each day of the week, to ensure that the user can cover the required distance with her EV, while the rest of the battery is put into the service of prosumer building or the energy system at large.

However, not every EV allows for bidirectional charging and some households may favor a stationary storage solution because their EV is not often at home. For those configurations we offer stationary 2nd-use battery systems to store surplus solar energy.

A major concern for bidirectional charging operation is additional battery degradation. However, the average power demand of a building is very small compared to the power demand of an EV on the streets. Moving a car on the autobahn (at equilibrium) will require 30 to 40kW. But most (sporty) drivers will once in a while max-out the available power to feel the instantaneous torque that an EV provides, which is mostly far above 100kW. At home, however, typical appliances will not require more than 5 kW (for most of the time) and our bidirectional charger (two-way-10) will not draw or charge more than 10kW (10x less than the power of an EV). In addition, the EV battery may be operated in a favorable state-of-charge range where degradation is minimal (after all, there is plenty of storage available for most of the time). Yes, bidirectional cars operated in V2X mode will be impacted by degradation, but due to power and storage requirements it can be reduced to an absolute minimum.

We are in the midst of the long awaited mass adoption of EVs and we see great potential in making the EV or entire fleets a key and integral part of any building that produces their own electricity using roof-top solar power.

sun2wheel makes idle storage capacities available to the prosumer household or the energy system at large. Where suitable or desired, we can extend the system with 2nd-use battery systems and operate with our system entire EV fleets or manage power flows in condos to make sure we draw not more power than available at the grid connection point. Our App has been designed for a non-intrusive management of a fleet of any size making the integration into the building system as smooth as possible.

Until now, Japanese EV-models have been the bidirectional pioneers, which are actually available on the market. But European manufacturers (especially the Volkswagen-Group) have announced a very clear path towards bidirectional vehicles enabling sector coupling of mobility and building energy systems. Find more information about us and our products on our new website www.sun2wheel.com and contact us for any questions or inquiries!